I originally wrote this post in 2011. It chronicles my early delving in to the world of loose leaf tea from my humble grocery store tea bag beginnings. Since this was posted it has been revised at least once. Rather than adding more revisions each time I grow and change a little, I am placing a link at the end leading to newer posts about my equipment collection. In the meantime, I hope you enjoy my original post: 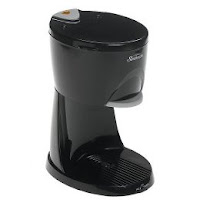 Recently my tea brewing has shifted directions. In the past I have heated my water in a Sunbeam Hot Shot and poured the water into my tea bag filled mug. At other times, when I was more adventuresome, I would heat the water and pour it over a 2” tea ball containing loose leaf tea. These two methods served me well to a point.

I had always wanted to use more loose leaf but at the office this has been a hassle as tea balls, though not complicated, are time consuming and a bit messy. When my Hot Shot recently heated its last cup, I knew it was time for a change. Truth is I couldn’t find a replacement locally. 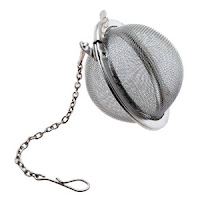 I bought an Russell Hobbs electric kettle. It holds 1.7L of water. I bought this particular one because it came with a tea pot that included an infuser basket. It also came with a warming tray to keep the pot at the proper temperture. Next time I will stick with the smallest electric kettle I can find (probably around .75L) and forget the tea pot and warming tray. I find I don’t drink tea fast enough to justify a pot full and the infuser basket is tall and very slender, making it very difficult to clean. That's not what I want to deal with at the office. 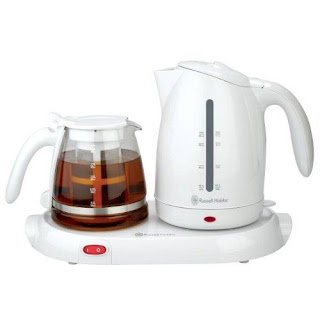 The kettle works great. It boils the water quicker than the microwave and makes a good tasting cup of tea. That solved half my problem. One hurdle remained. The leaves inside a tea ball are pretty compressed after brewing and they drip when removed from the cup. If I was to move away from bagged tea a different steeping method would be required.

I considered a large infuser basket that would just fit inside a mug. These generally come with a lid that is placed on the basket to hold in the heat while steeping. After the brew is complete the lid is used as a tray to sit the basket upon. Clean up would be easy once the leaves dried but as with the tea ball I envisioned a drippy mess on my desk. At this point a friend showed me the French Press he had bought at a local Starbuck’s. 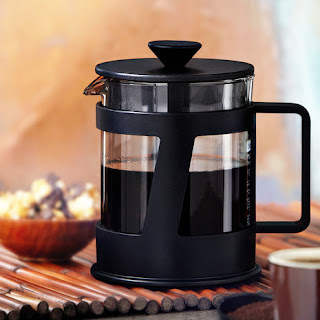 Actually designed with coffee in mind, a French Press also works great with tea. It is a glass carafe with a lid. A stainless steel plunger is mounted through the lid. The loose tea is placed in the carafe and boiling water poured over it. Then the lid is placed over the unit to hold the temperature while brewing. After steeping is complete the plunger is gently pushed down. This traps all the leaves between the bottom of the press and a stainless steel mesh filter on the plunger. The liquid is then poured into the cup. Removing the plunger will allow the leaves to dry. Clean up involves tapping the press against the trash can and wiping the press with a paper towel. Simple, clean, and effective.

The big advantage of the press is the leaves are free to interact with the water. This will result in a better brew than compressed leaves in a tea ball. Some tea purists have expressed concern that the affect of the plunger would be similar to squeezing the tea bag which releases bitter tannins in to the cup. This is an unfounded concern. The leaves are not squeezed at the bottom of the press as the name might imply. The plunger does not actually reach to the bottom of the unit. There is sufficient room between the filter and the glass to prevent squeezing or flattening the leaves.

The glass carafe is important to me because glass does not absorb odors, so it can be used with many types of tea without flavor sharing. The glass has no odor of its own that could get passed on to the brew.  An important aesthetic reason for this piece of equipment is the clear glass carafe makes for an easy and enjoyable experience watching the leaves dance and unfurl during steeping. Don't underestimate how important this is in the total experience of tea brewing.

The Starbuck’s French Press is made by Bodum. It is a 16oz unit. I find this the perfect size for my use. The cost is around $16, which is a pretty good deal for a glass unit with stainless steel components. The filter is replaceable as is the carafe. I also find the scoop that came with it works great for measuring my tea. There are a lot of different manufacturers and models available, though none I have seen as economical.

The French Press is the method I have chosen but there is another workable option available that costs about the same – less than $20 at the time of this writing. The alternative is a unit I have heard referred to as a reverse French Press. These have the filter in the bottom and the tea leaf is placed on top of the filter. The water is then added and the lid closed. After the proper steep time the unit is placed on top of a cup or mug and a pressure release drains the brew out the bottom. The two leading brands I often hear mentioned are Adagio’s IngenuiTEA and Teavana’a Perfect Tea Maker. Many other versions are available.

Why did I choose a unit designed for coffee over one designed for tea? One reason is that all the tea makers I have seen are plastic not glass. More importantly, I am skeptical that draining the tea out the bottom is the best of ideas. That is pretty much how my Hot Shot worked and I had problems with leaking because of lime build up. The last thing I need at work is to have boiling water pouring out the bottom and onto my desk. This may be a totally unfounded concern but the engineer mentality in me can’t get past the thought of the potential for problems. In fairness, let me add that the people who own the reverse presses love them.

With the electric kettle and the French Press I now have the tools I need to venture deeper into the world of loose tea. Can the expense be justified? Truthfully, loose leaf is generally cheaper per cup than bag tea. The $16 upfront expense of the press will be made up in just over a pound of loose leaf. Seriously. The point is, this move actually makes good economic sense. Going deeper into the world of tea and saving money doing it. Folks it doesn’t get any better than that.

Since originally posting this page I have made some changes. I have added a couple Finum brewing baskets. You can see my review here. I have also added a Hamilton Beach Programmable Kettle. It is reviewed here.

I have added reviews of several additional pieces as my addiction... er... I mean, collection grows. To see more of them check out posts labeled Teaware.