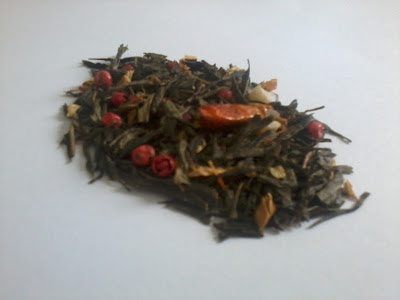 This came to me through a tea drinking friend. Her daughter’s husband bought it while in Ireland. I have never seen this brand locally, or even on the Internet, for that matter. The dry leaf is very interesting. The tea looks like dried grass clippings. There are tan flakes that I am guessing are peels or zest. Then there are tiny red balls that are probably peppers. Finally, I notice some larger dried pieces almost an inch long that again I presume to be peppers. These could be the dragon tooth peppers that are commonly used in Chinese food. What have I gotten myself into?

The tea is rather large pieces so I used a healthy portion. I did not have any steeping instructions so I used my usual parameters for green tea. I brought the water up to a light steam but well below boiling. I steeped this for 2 minutes in my press. I thought this was brewing rather dark until I picked it up for a better look and realized the leaf was floating near the top and blocking the light. The liquor is light green/amber. The wet leaf smells lightly peppery. Here goes…

The sip – Wow! This is really interesting and different. There is a moderate citrus rush followed by peppery goodness. The pepper doesn’t seem as hot as I expected. Only a tiny bit of heat in the aftertaste. A very mild jalapeno maybe. You catch a hint of the green tea in the aftertaste. These three flavors combine in the most unexpected way and result in a sweet pickle taste. At least that is the best I can do to describe it.

Ok, as it cools it does get a lot more peppery tasting. I can see if you aren’t a spicy fan this could be too much. It grabs the throat a bit and charges up your nose but never in an overwhelming manner to my tastes. There is also another bit of flavor I can’t quite place.

I brewed a cup for a friend who mostly drinks Lipton but I thought he would appreciate this from a grill master perspective (His pulled pork is literally the best I have ever tasted). His words, “this is good, it has a butterscotch element to it.” Yeah, I can see that. It’s the flavor I couldn’t identify. I steeped three cups from the same leaf. The flavor of the third was still going strong. This is Cool! It is like an extremophile, bizarre and magical all at the same time.
Posted by The Everyday Tea Drinker at 6:49 PM