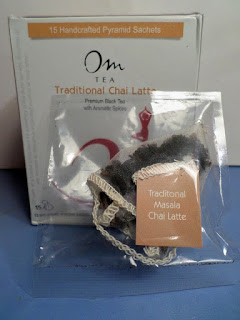 My Review:
I remember when I first started The Everyday Tea Blog reading a lot of articles abut blogging. One of the rules that was advised against was apologizing for not posting regularly. I realize I do upload several posts a month but it still seems like a long while since my last. Life gets hectic.

When you get too busy for tea you're too busy.

Fortunately we have options. Some of them are even good options, like the Om series pyramid sachets from Petit Tea. They currently list price for $5.95/15 sachets. That calculates to $0.40/cup with a resteep in cuts that in half. So they are reasonably priced. Easy to prepare. And so far they have been pretty tasty. This one smells delightful after removing the outer plastic wrap. The scent is slightly peppery and a nice blend of cardamom and clove. The hand crafted pyramid sachet contains black tea from India. This is not dust. It is a good step above typical grocery store fair.

I normally prepare chai without additions first, then add sweetener, and later milk. I chose instead to prepare today's cup per the fast preparation method recommended by Petit, The fast method and the traditional method are clearly printed on the box. Both require sweetener and milk.

In the traditional method you boil the water, add the tea and sweetener, continue boiling for one minute. Then add milk and boil another minute. I am not set up with a stove top in my den. The fast method steeps the sachet and sweetener in freshly boiled water for two minutes, then adds hot milk and steeps for another two minutes.

I used Splenda and milk heated in the microwave to near boiling.

I am really enjoying the washing of different flavors over my tongue. The ginger and the cinnamon pop in and out quickly. Same with the pepper. Each of them are taking turns. The driving flavors are cardamom and to a lesser extent clove. While I did catch anise in the scent, I can't really say I taste it in the cup. I really like anise. Maybe if it was a taste I did not like, it would jump out at me.

I had to research mace as I am unfamiliar with it. I am detecting something almost spicy floral. After reading up on mace I learned it is described as similar to nutmeg. After some thought, I do believe that more accurately describes what I taste in the cup. Possibly it is a mix of anise and mace.

This is a very nice cup. I enjoyed it just as much once it was cold. Petit's winning streak continues with this one.