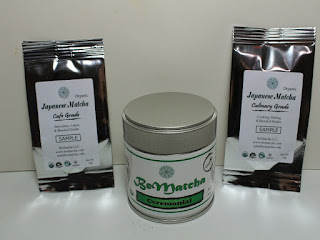 BeMatcha has offered three grades of Japan sourced matcha for review - a Ceremonial Grade, a Spring Grade (Cafe), and a Summer (culinary) Grade sample. After some thought I have decided to devote a separate review to each.

I chose to start with the BeMatcha Summer Grade offering as I am becoming quite familiar with culinary matcha. This grade tea is intended to be used in the kitchen. The matcha aficionados would not really think of drinking it straight. It has however become quite popular for use in cold and hot lattes.

I will first prepare this straight, because I am not an aficionado, but more so as to compare to the higher grades in the other reviews. Next I will use it to prepare a cold milk latte. 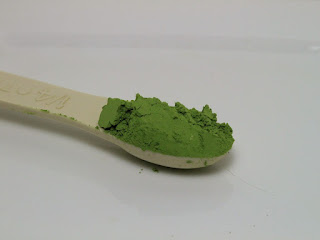 This matcha is listed as being organic and grown in Kyoto Japan. It is from the third harvest as such it is considered a lower grade. True Ceremonial Grade is prepared using first harvest leaves.

The sample is 10g. Cutting off the top allows for the sniff test. It is fruity and otherwise pretty indistinct from the many other culinary teas I've tried. One thing of note is that it smells pretty much like most of the Chinese intro powdered teas I've used.

The color is much more vibrant green than usual.

I used a rounded 1/4 tsp. The directions call for 1 - 2 tsp but from experience I know I don't enjoy it when it is that potent. 4 oz of water heated to 165F was added in a bowl and whisked. More honestly, I frothed it with a hand held milk frother. Just so you know, that creates quite a mess. Keep some towels handy. 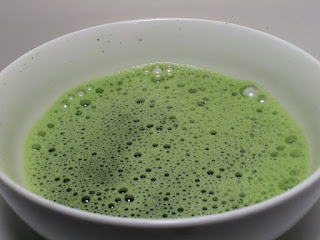 It frothed pretty well for culinary and actually held the foam although some of the bubbles are quite large. I poured this into a mug so I could photograph the tea. As you can see it is a murky dark green in appearance. 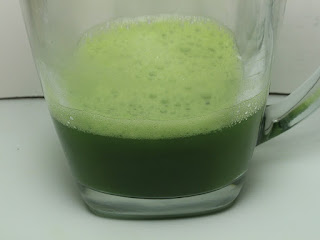 I was expecting a very bitter sip. It really was not particularly harsh. I have definitely had much worse. The taste was a little grassy with a brisk bite. It is a little sweet and has a fairly clean aftertaste.

As a straight drink it is certainly not terrible. It is better than most of this grade. Rather the problem with it is it is just not that interesting on its own, but then it isn't intended to be used this way. 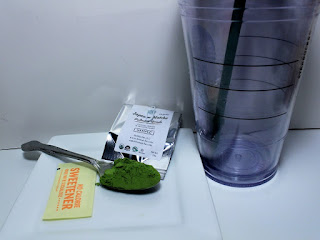 Next I'm trying this as a cold milk latte. This is how I start every morning. I begin with a heaping tsp of powder, along with one packet of zero calorie sweetener (in this case generic Splenda). Just a word on this - if you go to Starbucks and order a Frappuccino, it contains a lot of sugar. A lot. Once I broke the cycle I realized it just isn't necessary to make it so sweet.

The dry ingredients go in my double-walled plastic tumbler to which I add 2-3 ounces of cold milk. A hand held battery operated milk frother is used to thoroughly mix and foam the contents. 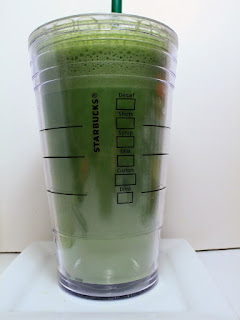 The few ounces of milk will rise often making 2-3 times the volume of foamy goodness. I then fill the tumbler the rest of the way with milk. When the straw is added it usually stands at attention unless the matcha is of such poor grade as to not be up to the task. This one easily handles the job. In fact by the time I get the camera set up a lot of the tiny foamy bubbles have already formed bigger bubbles but the straw still stands.

As you can see this makes a dark green latte. This is very appealing as too often the color is a sad light grayish green (clay).

Tasting, this is pretty good. It is sweet without being sickening sweet. It has a nice fruity taste that reminds me of mild strawberry. Rather than grassy it is more leafy tasting.

You can find BeMatcha Summer Grade here
Posted by The Everyday Tea Drinker at 3:39 PM