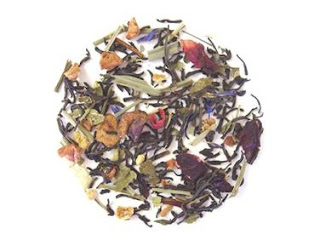 Check out how pretty the blend is in the picture. According to the label on the package, this is a decaf black tea with fruit pieces, cinnamon, and orange rind. I wrote Empire Tea Services to find out what else is in this as this tea is not on their website. They wrote back quickly with the complete ingredient list shown above. They also stated they are in the process of planning a major web update. Their website has always been a bit confusing, so I am looking forward to the redesigned layout. This tea will be added to their site at that time.

My wife bought this one. She is always on the lookout for a good caffeine free cup. Normally that means herbal. Not today! The first time we brewed this we over steeped a bit. The color of the brew was almost grape Kool-Aid. The next time I only went two minutes. The brew on a short steep is honey colored.

The brew smells a bit spearminty. I only slightly detect that element in the sip. The decaf Ceylon base is very light. I can’t single out chamomile but it is in here as is rose and lavender and orange. Yes, it has hibiscus but it is well behaved, adding only the slightest tartness. I am not a tart fan so I would complain if it were. I am not doing a good job describing this as I cannot quite place the taste. The best I can do is say this is a tasty late night fruity desert sip. I really enjoyed this with a bit of sweetener, and my wife is happy with it so I will gladly sip this with her in the evening .

Update: After drinking this several times I am now learning to separate some of the flavors. The spearmint is light and is used to support the combination of rose and lavender. The hibiscus as I mentioned earlier adds just a hint of tartness. The strawberry, apple, orange, and lemon give it a healthy fruity base. This is kind of like Kool-Aid for grown-ups.
Posted by The Everyday Tea Drinker at 8:53 PM