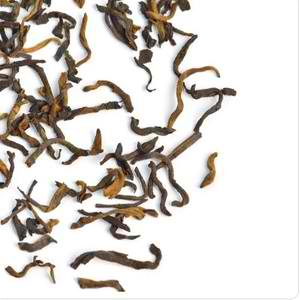 I tried to not open my latest round of samples from Teavivre until I had finished a few of my open teas. I tried. I really did. We had a lot of fatty foods at work because of a birthday celebration (not mine). There are free Cokes but puerh just sounded better for dealing with the oncoming food abuse.

The loose leaf is on the small side and a good mix of dark chocolate brown to golden cocoa in color. You can tell it is golden buds. The scent is (ahem) horse barn, yeah, yeah, I know, people who drink puerh must be crazy people. I offer no excuse except we can’t help ourselves. I steeped the leaf for a little over a minute in boiling water. I did not do a rinse. We shall see if that was a mistake. The brew began to pour out as a root beer colored liquor that halfway through the pour suddenly gushed forth the darkest chocolate brown. The full cup looks like coffee. The wet leaf scent is as the dry leaf.

The sip is smooth horse tack along with the sensation of mint without the taste of mint. A rinse is definitely not necessary and might be considered a crime in certain crowds. It seems to have a natural sweetness of its own. I added sweetener anyway. It really didn’t improve the flavor. That’s interesting. Usually I find it amplifies notes I was missing. Not this time.

Halfway through the first mug, I get the first tummy rumblings. I have mentioned the rumblings in other reviews but I have never explained it. Puerh is not a laxative. It works similar to yogurt by encouraging healthy intestinal cultures used in digestion. Great for preparing your gut for fatty abuse.

Second cup I went two minutes and the liquor looks like ink in the cup. The wet leaf now smells mostly of horse tack. With the first sip I notice a sticky lip feel. I don’t know what causes it but I always like it. This cup takes right off where the first left off. There is nothing foul or off-putting in the taste. Just wonderful leathery goodness.

Cup three at about 2 1/2 minutes. The brew in the French press is orange red. It now looks like tea in the mug. The sip, in addition to the leather which is decreasing in strength, has now developed some mushroom notes and a bit of creaminess to the mouth feel.

Cup four, I think I went 4 minutes. Lighter than the third but still reasonably dark and flavorful. I think the leaf might go another but I can’t so this is where I am quitting.

This is so much smoother than Teavivre’s touchas, and while the flavor is similar, here there are no sharp edges. Just a good leathery shu.
Posted by The Everyday Tea Drinker at 3:36 PM