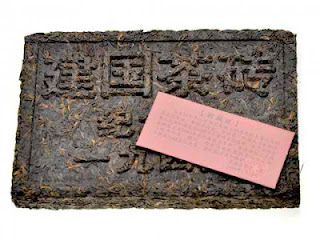 Esgreen Description:
This tea cake is made for celebrating the 60th anniversary of the founding of People's Republic of China. Totally 5688 pcs available. A rare 500g large brick. Very collectible


My Review:
I need to start with an explanation. The sample label was mistyped as 2005. This is a 2009 vintage ripe puerh. I only point this out as I think the title of this page at the top of your screen may show the wrong date. If so, sorry, it happens, and I don't see an easy Blogger fix. If it reads correctly, ignore my babbling.

This is the fourth sample I have tried supplied by Esgreen. The generous sample was a solid chunk of brick but it came apart pretty easy. The leaf color reminds me of walnut shell with bits of milk chocolate mixed in. I used about 4g based on my guess that this is a 12g sample. I poured a small amount of boiling water over the leaf and swished for a few seconds then poured it off. I seldom do a rinse but this leaf seems so solid I thought I should soften it first.


After the rinse, I waited maybe 30 seconds for the leaf to awaken, then poured boiling water over it. I steeped for one minute. The brew seemed light caramel with ruby tints until I moved the press and the heavier dark brew in the bottom mixed with the lighter top layer. Now it is all dark ruby tinted. The nose is heavy earthy leather. A bit musty.


The sip is much lighter than I was expecting. It is leather with a lighter wood taste that tingles the sides of the tongue. As it cools the whole inside of my mouth is tingling. It is very sweet and feels gooey. Yep, that’s my technical term for it. The feel is not milk or cream but it has substance – so it’s gooey. The slightly musty earthy aroma mixed with the sweet leather taste is a good combination.


The aftertaste is strong leather that quickly dissolves into sweetness. There is a sense of coolness on the breath. This could just be coincidence, but my lungs feel more open and I can breath more freely.


Cup two at one minute is very similar to the first however, the flavor is a little more intense.


Cup three at two minutes yields a darker cup. In the press it still has a ruby tinted caramel color. In the mug it looks like coffee. It is bright and clear, shiny with no oily film. This is not getting weaker, just more mellow. This is the best cup so far.


Keep in mind, I use a hybrid brewing method. Eastern brewing usually involves a large amount of leaf in a tiny gaiwan of about 100ml (about 4oz) and flash steeps of 10-15 seconds. Using a gaiwan, I would be nine cups into this tasting at this point. Traditional western brewing uses a teapot of multiple cups and 3-4 minute steeps. I am using my press and 12oz water (about 350ml).


At this point I spread out the leaf in the bottom of the press and removed the lid so it could dry and left it till morning.


Cup four on day two is a little lighter in color and feels like melted chocolate on the lips. The taste is mellow leather with a mineral finish and subtle hints of chocolate. Better than yesterday. A good start to the day.


With cup five the leather has disappeared, to be replaced by a light metallic mineral taste,. This is still a flavorful cup.


I am stopping with cup six (that’s 72oz total). I steeped this for four minutes. The brew is lighter in color but still plenty dark. This is mushroom, a hint of leather, and light chocolate.


I thought this one started a bit ordinary. As I continued to brew, it morphed through some interesting changes. A nice shu.

Visit the Esgreen web site.
Posted by The Everyday Tea Drinker at 4:14 PM