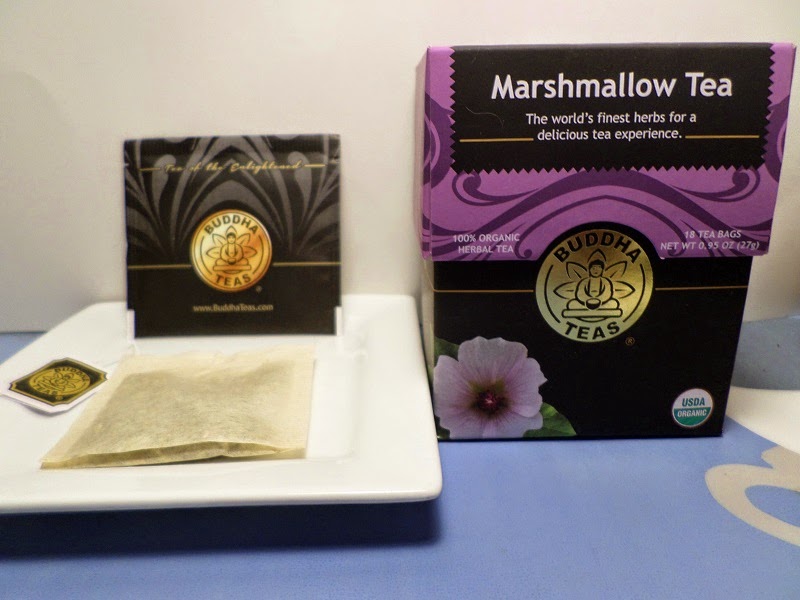 Buddha Teas Description:
For most people, the word marshmallow conjures up the thought of a sugary white treat, but few people know about the plant behind it all. Unsurprisingly, marshmallow belongs to the mallow family. Once limited to Africa,marshmallow is now widespread throughout Europe, Asia and North America. These plants thrive in damp environments, such as in swamps, marshes and bogs, as is indicated by their name. Modern day marshmallow is commonly used in landscaping. To the ancient Egyptians, however, its most valuable part was the root, which served as a food source, and was used to create the sugary confectionary that would eventually become the modern marshmallow. Marshmallow tea is made from the leaves, and has a fresh, mildly sweet flavor and pleasant aroma. Drink it on its own or add a bit of sugar or honey for a delightfully sweet herbal brew.

My Review:
Today we will be looking at something that has interested me for a long time and I haven't tried before - marshmallow! I have seen it listed as an ingredient in teas. Here it is the only ingredient.

This is listed as organic and kosher. The bag is unbleached. The box is 100% recycled. Inside the box each of the 18 bags are sealed in individual envelopes. The string on each bag is long enough to avoid drowning the tag when pouring water over the bag. The tag is staple free by the way. 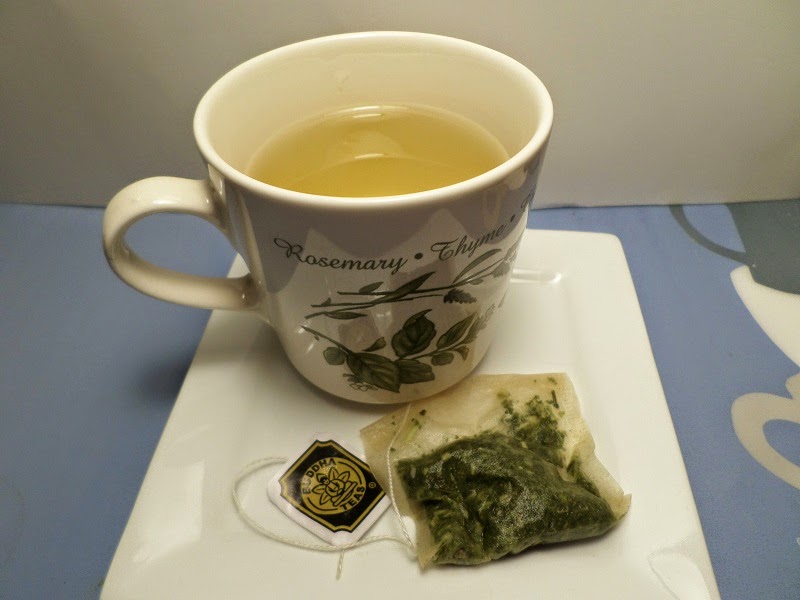 I don't notice any particular scent from the dry leaf. Each bag contains 1.5 grams of leaf if my math is correct. I prefer at least 2 g. To compensate, I will use my 6 ounce cup today.

I used filtered water brought to a full boil. The steep time was 5 minutes. When I removed the bag, I noticed how green the marshmallow leaf had turned, along with some white streaks that don't show in the picture. I also noticed the bag was very squishy with a slick texture - it feels like a wet marshmallow.

The liquor is very clear and yellow with just a hint of green. It looks very appealing because it looks like spring.

The taste is not even close to what I expected. This does not taste anything like a big fluffy marshmallow. It is sweet but not overly so. It has an almost minty quality to it. This tastes lightly citrus to me, slightly like lemon. While nothing like Stay Puft marshmallows, it is rather tasty.

I added a little sweetener to it, just to see. I personally don't recommend the sweetener. Now it is over the top sweet. It feels really thick like syrup. Maybe it did before and I didn't notice.

Without sweetener, I found this to be a very enjoyable cup. I wouldn't mind this late in the evening when I'm avoiding caffeine.

You can find Buddha Teas, Marshmallow Tea here.
Posted by The Everyday Tea Drinker at 5:43 AM