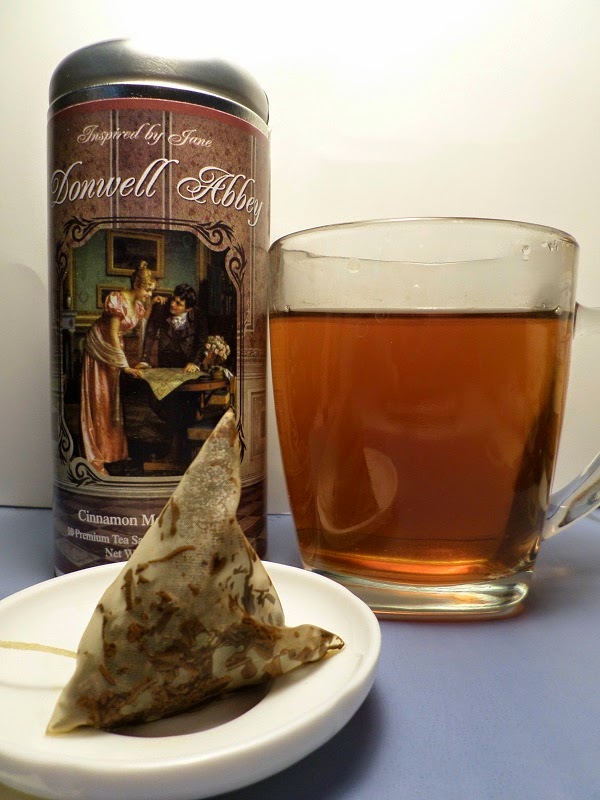 These beautiful tea tins are inspired by the literary works of Jane Austen. Each blend is named for a manor home of one of the beloved characters, and the flavors were specially chosen to reflect the spirit of that home. Each can features period artwork against a vintage background, and a quote from the associated book.

Sample provided by Inspired By Jane

My Review:
I'll be the first to admit I am not much of a reader. Well, that isn't exactly true. It is just that my reading style is researching and studying. Give me a technical manual and I geek out. The classics aren't really my thing. I make this declaration to point out I have no point of reference between this tea and Jane Austen or her writings. I do know a little about tea, so I can offer opinions about that subject.

First, the tin is quite attractive. I can see it being kept long after the tea has served its purpose. There are currently five different teas (and tins) in this series. Ingredients and steeping instructions are clearly stated on the back. I noted that no scent could be detected before the tin was opened.

I noticed right away that the tin contains 20g of tea in 10 sachets. That works out to 2g of leaf per sachet. Thank you. That is sufficient to steep a real cup of tea. No need to double up here.

Cutting the tape and removing the metal top, I now catch cinnamon and a sweet fragrance wrapped around the black tea. It is kind of cherry like and reminds me of my grandfather's pipe tobacco.

I removed one sachet for exam. The leaf is dark with some golden tips. It is actually a good quality appearing leaf. I don't mean that as a statement of shock, rather as an acknowledgment this is not typical grocery store fare.

I used boiling water and a two minute steep. The brew is reddish orange. The sachet has really swollen and you can easily see the color of the cinnamon through the sachet.

The cinnamon really dominates the aroma. The senses want to read this as a chai but it is not. The sachets are not filled with cardamom or other Masala spices. This contains Marsala wine flavoring. That one letter makes a big difference.

The taste is really good. At first you catch the cinnamon. This is replaced by a sweetness with a touch of peppery spice. It fades into a flavor that inspires thoughts of cherry wood. I have never tasted Marsala wine, but if it tastes anything like this, I would love it.

When Inspired By Jane contacted me to review this tea, I wasn't sure what to expect. I am pleased to say the quality is very good.

You can find  here and here.
Posted by The Everyday Tea Drinker at 7:49 AM