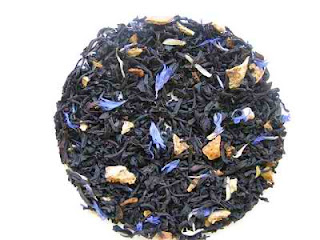 This is one of two samples I received during my visit to Empire Tea Services. The dry leaf is very finely cut pieces of Ceylon. Also in the mix are blue cornflower petals, and pieces of orange rind . The smell is fantastic. Very chocolate, amplified by the vanilla. The bergamot is understated in the dry scent. In the Earl Green it grabbed you before you could even open the bag.

I used a healthy scoop of leaf and 12oz of boiling water. Steeped for 3 minutes in my French press. ETS says to steep 5 minutes, but for my tastes 3 was sufficient.

The root beer colored liquor, when hot, tastes just like it smells. Chocolate and vanilla with just a hint of bergamot in mid sip. There is also a roasted note in the back of the throat. It’s not smoky, or even roasted like a charcoal firing. It is more like a burnt caramel or like the scent of roasted coffee beans. There is also the sensation of drinking warm milk.

As the cup begins to cool the bergamot comes out of hiding to take center stage but doesn’t forget it is part of a group. The chocolate/vanilla notes become Pips to the bergamot’s Gladys. Sure they can perform solo but together they are magic. The more the cup cools the stronger Gladys becomes until the bergamot nearly reaches the intensity of the Earl Green. Wow! Encore! Encore!

I was going to pass the second cup to a co-worker but I just couldn’t part with it. Yeah, it’s that good. Second cup also three minutes. Cup was half empty before I slowed down to taste it. This steep picked right up where the first cup left off.

I did steep a third cup and I did pass it on. Steeped 4 minutes. I was told it was not weak and that he really liked it. I personally can’t confirm it. A 4th steep between 5 and 6 minutes had nice color but was pretty flavorless until the cup cooled way down.

This is a bit drying but not at all bitter. This is my first crème Earl Grey, so I can’t compare it to other blends. What I can say is this is really, really, really good. A fine Earl Grey with major yum factor. The empty cup even smells amazing. This sample isn’t going to be around long.
Posted by The Everyday Tea Drinker at 7:54 AM