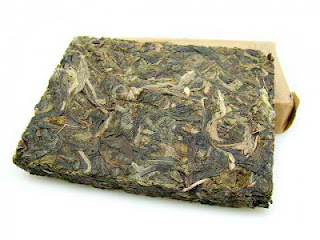 This tea cake is made for celebrating the 60th anniversary of the founding of People's Republic of China. Totally 5688 pcs available. A rare 500g large brick. Very collectible.

Sample provided by Esgreen for review.

My Review:
One look at the rectangular sample brick and it is obvious why this is named tippy. The milk chocolate colored buds are very apparent. This is the most solidly packed leaf I have yet encountered. A lot of puerh drinkers would most likely have used the entire sample. I wanted to use only half. I attempted to cut it in half to make two squares. I quickly realized I would either make a mess or hurt myself. Then I got the bright idea to turn the sample on edge and split the layers. It was so easy to separate when you work with the grain. Note to self: Work with the grain.

In the press it goes and boiling water is poured over it. The steep time was 2 minutes. I went with a long western steep rather than doing a wash and then using short steeps. The brick has mostly come apart. The leaf is still tightly packed but not compressed. The scent of the dry leaf is more green vegetal than sheng. The brew is golden, turning orange in the cup.

The sip is at first bright and metallic maybe more aluminum. In mid sip it changes to a layer of flavor that is earthy – like rich dirt. Interesting. I have not experienced that in a sheng before. It is not heavy and dark like shu puerh. Running below this earthiness and coming to the surface late in the sip is a gentle layer of smoke. This seems a little drying.

I decided to add sweetener to the first cup to see how it impacted the flavors. The metallic layer is toned down a notch. The earthiness is muffled. It is almost too sweet even for me and I have a sugar monkey on my back. The sweetener does however bring the smokiness out more. I am getting a definite feeling of openness and a cooling sensation in my lungs. I am also feeling a cotton mouth. Very drying. As I chugged the last bit of this cup I got the distinct taste of horse tack. I must have more.

While cup two is steeping I notice the brew aroma is ash, light horse barn, and very light fish. Ain’t puerh fun?!? I steeped for one minute. This cup is a darker orange. The leaf is pretty much relaxed. The sip is still metallic and smoky and now a little mushroom is added. Again I use sweetener. This removes the mushroom and tames the sheng brightness. I can now easily catch the horse tack lightly in the after sip.

Cup three at 2 minutes was bright, metallic, and bitter. Adding sweetener barely calmed it down but did bring out background notes that show this is aging nicely.

Cup four at 2 minutes will be the last of the day. This is still going strong. The pot aroma is showing depth and age. Translation, it smells like barnyard. I hope to save the rest of the sample back to age, so it will loose that sheng bitterness. This one shows great promise. Under the brightness this is the best cup yet. The developing leather notes are especially nice in this cup.

I enjoyed this sheng. I think it would be really wonderful after it ages further and looses the bitterness of its youth.

Posted by The Everyday Tea Drinker at 6:07 PM