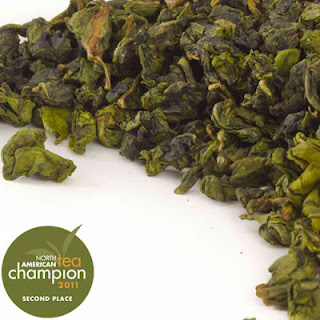 A blend of meyer lemon oolong and lime oolong teas make this brew sweet and tasty.

This is another generous tin furnished by Zenjala. This proved to be quite an interesting tea. When I opened the bag it was heavily lemon lime. Honestly it was kind of too heavy to the point of smelling artificial. I was concerned. The leaf is tightly rolled into nuggets typical of oolongs. You can't tell it by the picture but the appearance of the nuggets is a bit grainy or fuzzy looking.

The label on the inner bag is clearly marked with brewing instructions. I used a scoop of nuggets in my press. The first cup was not nearly as heavy on the lemon lime as it smelled but I couldn’t make up my mind about it. The oolong base was coming through, but in the background. The taste was like what I would expect from a flavored tea bag. Maybe if I used a short first steep it would be greatly improved. I'll have to experiment with that next time.

As I steeped cup two I noticed how full of leaf the press had become. The leaf has really expanded. This time the lemon lime is greatly reduced. This is a good cup.

As the cup cooled the highly floral oolong began to shine. Sweet, sweet honeysuckle. Now this is a great cup. I think the base is Huang Jin Gui also known as Golden Osmanthus. Whether I am correct or not it is still very nice. I didn’t have time to steep this further so I sat it aside, because I know it will go a lot longer.

The next day I continued to use the leaf and steeped three more cups for a total of five – 12oz mugs. The last still had nice floral flavor and the lemon and lime were still mildly present.

Rehashing a bit, though I didn’t care much for the first cup as it seemed too heavy on the lemon lime, the rest of the cups were excellent and highly floral like a high mountain oolong. The lemon lime move more into the background with each cup. Yet it is still present in every cup. I really like this one.
Posted by The Everyday Tea Drinker at 9:31 PM