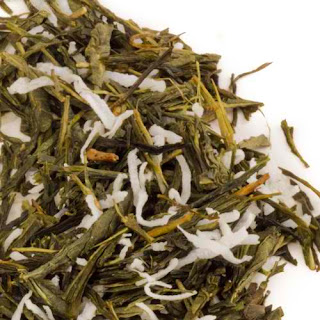 This is the sixth of the samples provided by Zenjala Tea Company. I have enjoyed all of their teas immensely. The one ounce samples came sealed in a black plastic pouch and then packed safely inside a pretty tin. The sample bag is clearly labeled with steeping instructions.

When you open the bag, you are greeted with the scent of coconut. Taking out a scoop of leaf for examination is a visual treat. Among the green sencha leaf pieces are shreds of coconut and slivers of almonds. Yeah, it looks like the picture.

As usual I used my French Press with 1 healthy scoop of leaf. 12oz of water, heated well below boiling in my kettle, was poured over the leaf and steeped for two minutes.

Oh wow! This is good. Sweet shredded coconut, almond slivers. Mmmm. You don’t really taste the green tea which seems a shame but you really don’t miss it because, well its coconut and almond. This is naturally sweet and no additions are necessary. Adding sweetener does not change the taste so much as brings it better into focus.

I gave the second steep to a co-worker. He buzzed me later and said, “This is so good! You have got to try this one on ice”

So I did. The third steep proved he was right. Although a bit weak this was a great glass of sweet refreshment.

As I was drinking this I kept thinking I have got to mix this with the chocolate mint fusion puerh. I am thinking Almond Joy in a cup. I will make this thought a reality in the near future. Look for a review coming to an Everyday Tea Blog near you.

--------
UPDATE:
Ok, while it sounded like a good idea, mixing the Coconut Almond and the Chocolate Mint Fusion did not result in the joyful flavor treat I was expecting. The flavors cancel each other out, leaving a muddy blah cuppa. One tea friend suggested that coconut and mint do not mix. Apparently not. That's ok, I learned a lesson and I still have some of each tea to enjoy on its own. Looking forward to it!
Posted by The Everyday Tea Drinker at 1:16 PM