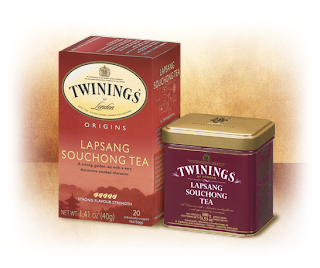 Twinings Description:
Lapsang Souchong tea comes from China's Fujian Province and Taiwan. The unique flavour of Lapsang Souchong is produced by lying the leaves out on bamboo trays and allowing smoke from pinewood to permeate through them. Twinings Lapsang Souchong is an adventurous tea with a unique smoke flavour and a dark rich colour. Drink with or without milk.

My Review:
This is one of three samples I received from Twinings. For years I have avoided lapsang like the plague. I couldn’t imagine enjoying a heavily smoked tea. Having sampled some really good loose leaf smoky teas lately, I am feeling brave. This is a bagged tea but its Twinings and they seldom disappoint. Removing the bag from the envelope and sniffing reveals a strong scent akin to putting your face in the cold ashes of a fire pit. I am not afraid. Well, maybe a little. I steeped with boiling water for only a minute and a half. The room now smells of smoke and it reminds me of bacon. It’s making me very hungry.

The sip immediately brings two things to mind. First, a little over a year ago I would have tasted this and gone, “Eeeeew, Ick!” Today I am thinking this is not bad. Second, I am impressed at the complexity of the smoke flavor in this bag. It moves from the mouth to the throat and then into the nostrils. This is definitely the most heavily smoke tea I have had to date and I am liking it. The aftertaste is long lingering. The base is Fujian and Taiwanese teas. I really can’t comment on the choice of base leaf as I can’t separate it from the smoke.

The second cup from the same bag :) I steeped at three minutes. It is much sweeter. For a brief instance I think I taste leaf, then it disappears again. This cup tastes like pulled pork barbeque. Liking this one a lot.

Third cup! Yes, a third cup. Steeped five minutes. It is lighter but still very flavorful. My exposure to lapsang is limited but this is pretty good tea.

From Twinings website the loose leaf version of this tea has been discontinued.

Visit Twinings USA at http://www.twiningsusa.com/
Posted by The Everyday Tea Drinker at 8:56 AM