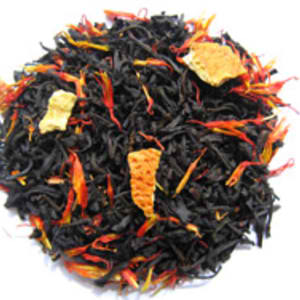 Nina's Tea Description:
The tang of oranges infused with the mystery of cinnamon creates a blend that is certain to invigorate and stimulate your mind.

My Review:
Nina's Paris has been around for over 300 years. Just recently they have begun to sell tea in America. You can find at least some of the offerings on Amazon. They also plan to open an ecommerce webstore at  ninasteastore. At the time of this writing the webstore is not open.

So Nina's recently announced they would send 3 samples out to any Steepster folk who were interested. Free tea? Yeah, I think I can handle that one. This is the first of my three samples. It came in a tiny clear plastic zip lock baggie. Just the perfect size to make one cup.

The leaf pieces are small. I considered using my Finum basket, just in case, but the leaf worked fine with my press. The leaf actually plumped up nicely. This is very fragrant of orange and cinnamon. Breathing in the aroma from the press, the black tea base is easily detected. The liquor is a dark golden color in the press and much darker in the mug.

The sip is quite pleasant. Sometimes cinnamon can be overpowering and orange can turn too candy like. Neither is the case with this tea. Given the intensity of the scent, one might expect a bold cup. This is a light cup and very well balanced. If it were any more subtle it would be too light. If it were more flavored, I think it could enter the realm of Constant Comment, not in taste but in intensity.

The only negative I find is my expectations. By Nina's description of invigorate and stimulate, I was expecting a big bold in your face wake up you sleepyhead tea. For my tastes this would not work as a morning cup. This is more a lazy afternoon or early evening tea. It is quite nice for such occasions.

Posted by The Everyday Tea Drinker at 9:49 AM