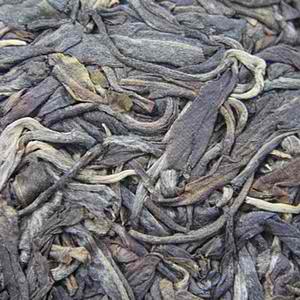 The is my first review of five samples provided by China Cha Dao. Ok, I am going to do my typical American thing while brewing, but I will compromise on the steeping times. I am using a healthy spoonful of leaf in my French Press and a 12oz mug. The dry cake smells slightly grassy. Did a 10 second rinse with boiling water. The wiry looking dry leaf immediately started coming to life. Let it rest a moment then did my first 30s steep with boiling water. The steeped leaf varies from brown to bright green. The smell of the leaf is rich and earthy. The brew itself doesn’t have a detectable scent. The cup is a light amber color. The sip is thick almost syrupy. There is a heavy earthiness that rises quickly and just as quickly passes. I detect no grassiness and no bitterness in the first cup. I have a cheap cooked version (by another seller) of this tea that I have to mask its’ overwhelming flavor with chocolate mint. This is slightly pungent but I did not feel the need to mask or add anything to this tea. I had to try to push this tea and find out how far it would go. I list the rest of my steeps below.

2nd steep. 30s, boiling water. Now I detect the aroma of spinach in the leaf. The brown is gone – all green now. There is a slight film on top the cup. The flavor is more even, pronounced, and complex. Still very smooth with a heavy dose of earthiness. No grass. No bitterness.

3rd steep. 35s, boiling water. Leaf more vegative smelling. Brew gets a little darker each time but still amber. Best cup yet, but I really can’t explain how it is different from the last except to say it is smoother and fuller. Interesting. Oh, and the caffeine is beginning to make me a bit jittery.

4th steep. 40s, boiling water. I noticed the third steep left some grit on the sides of the press. Next time I do a rinse I need to remember to stir the leaf a bit before pouring it off. This cup is close in taste to the third cup. I am digging this. I just realized it has lost the pungent earthiness of the first couple cups and replaced it with mellow. This is probably what I was noticing in the third cup.

5th steep. 40s, boiling water. Think I need to bump up the steeping time. This is light like the first cup. Still a ton of flavor. Back to earthy but not pungent. Or it could just be the smoked pork I had for lunch cleansed the palette of the salsa taste from last night. Man my wife got it oniony – but sure was good.

6th steep. 50s, boiling water. Never have got a hint of bitterness and nothing that I would consider grassy. Increasing the time helped. The clarity in the press is still very good. I only used about 2g of tea, I am on my 6th cup and this stuff shows no signs of giving up. In fact I think this is the earthiest cup yet and this is a good earthy, not fish tanky. I am impressed. This is probably the last steep of the day. Tomorrow I will start again where I left off. I have to know how far this tea will go.

Day 2. 7th steep. 1m, boiling water. Last night I drained all the liquid that I could, spread the leaf out on the bottom of the press, and covered. I worried how it would survive the night without me. After steeping, the leaf still looks good and smells like veggies. The liquor is clear amber. Waiting for the water to cool is killing me. I need my fix. Please, no interventions. I like the monkey on my back. First sip, aaaahhhh, sweet release. Just as I left you, my precious. Actually, it’s a touch weak. I’ll have to up the steep time! I also notice it still feels syrupy.

8th steep. 2m, boiling water. Remember I am using a 12 oz mug. If I were using a 6oz cup this would be the 13th steep. Increased steep time helped. This is similar to yesterday’s last steep but mellower. Just figured out what that syrupiness reminds me of – ever bought potato chips prepared with fat free Olean? Yeah, its that sticky feeling on your lips.

9th steep. 4m, boiling water. Ok its getting weak again, so I should stop while I am still enjoying it. Almost tempted to go the 10th steep just to get to 120 oz out of 2g of tea leaf. More tea and less steeps might have given a more intense experience but I am really pleased with the results as I have done it.

10th and final steep. 7m, boiling water. Queue fireworks and thunderous applause. I’m stopping, I’m stopping. I have 8g of this left and 4 others to try. Pretty sure a brick of this stuff would last me a lifetime. I am impressed. The last cup still had a lot of good flavor in it but I’m quitting. I’m quitting. O sweet leaf, I miss thee already. Oddly, before steeping I noticed the leaf is back to brown and it has taken on the most unusual flowery scent. Good ending.
Posted by The Everyday Tea Drinker at 7:37 AM