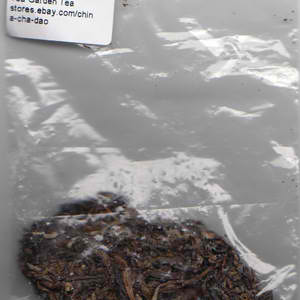 This is the second of five samples given by China Cha Dao. This is a raw sheng puerh. The leaf was a little hard to break off from the sample cake. I don’t have the proper tools for the job. Used about 2g of leaf (1 spoonful). Water heated to less than boiling (no fish eyes). 10 second wash swirling the leaf in the water and poured off. Kind of botched the first steep. I poured the wash in my drinking cup, so I was in a bit of a panic finding another cup. My first steep was maybe 45 seconds. The liquor was pale yellow green and quite clear. The aroma in the pot was a bit scary. It had that puerh smell towards the fishy side. Weird but did not have a bad aroma once poured. Must have left with the wash. The wet leaf is made up of small broken pieces. I don’t think I did this chipping it off the cake. First sip is very light and pleasant. Not at all what I expected. The earthy taste is there but subdued. It became a bit more pronounced as the cup cooled. This is very easy to drink but for my taste lacked the character of the Nan Nuo I’ve tried. I won’t record all my steeps this go around but I did 5 today and I imagine it will go that many more. Each cup today was pretty much the same as the last. Smooth and even.

Update – Day 2. Sadly, the leaves did not survive the night well. The broken pieces of leaf deteriorated into even smaller pieces. I thought this tea would go ten cups but I only got two additional cups out of it – for a two day total of 7 – but today’s cups were weak and bland. My mug is 12oz. So I got 84oz out of the 2g of leaf. Really only 60 of it were proper strength. Still that’s impressive.
Posted by The Everyday Tea Drinker at 5:11 PM