Good Earth, Sweet Chai of Mine 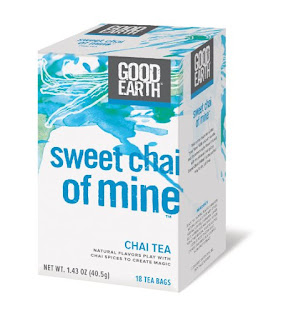 Good Earth Description:
Take a step back for a little “you” time. With smooth vanilla and decadent maple flavor infused with traditional chai spices, Sweet Chai of Mine™ is the perfect way to do just that.

My Review:
Chai is kind of hit and miss with me. I don't hate it, but I never crave it. I have tried a few I can say I liked. Here's hoping Good Earth's twist on the classic speaks to me.

The box contains 18 tea bags, each sealed in an aluminum envelope. The box lists net wt as 40.5g. Divide by the number of bags (18), gives a per bag weight of 2.25g. That is above average for US tea bags. 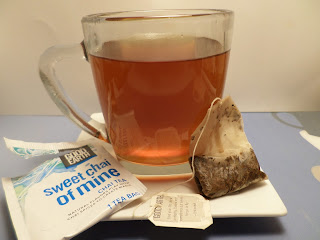 Opening the envelope, I am hit with a medicinal aroma. Realizing the taste is often different, I proceed.

Water was heated to 200F and I steeped in the mug for 4 minutes. As it steeps the aroma becomes more of a traditional chai.

Tasting time. This is much lighter than the majority of chai I have tried. Personally, I like that. I taste the traditional spices of cinnamon, cardamom, ginger, etc. I also taste light touches of vanilla. I am not getting the maple. With the use of stevia and licorice root, this is sweet but not overly. I think chai should be even sweeter.

I added the equivalent of 1 tsp of sweetener. This brings the mug to life. Besides sweetening the mug, it brings out the maple flavor and intensifies the vanilla. I am also catching the black pepper. Along with the ginger this adds a bite and some heat late in the sip.

My last tinkering was to add a splash of milk. This makes it taste even more maple. The chai spices are muted but still present, making the bite and heat more noticeable, though they aren't really any stronger.

Being generally not a chai fan, I found myself enjoying the mug in all the various stages of tinkering. Which was my favorite? It was a toss up between sweetened and milk added. Each was different but I liked them equally.

You can probably find Good Earth Sweet Chai of Mine at your local Walmart or Kroger store. If not you can order direct online from Good Earth.
Posted by The Everyday Tea Drinker at 12:25 PM