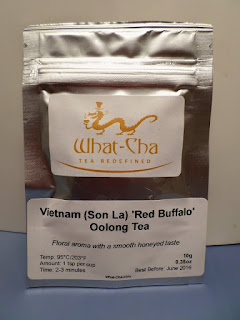 Sourced by Geoff Hopkins of Hatvala, who regularly travels Vietnam in search of the best teas, all of which are sourced direct from the tea producers.

It is Hatvala's mission to raise awareness of the high quality Vietnamese teas which are often overlooked on the world market and it my pleasure to assist by making Hatvala's full range of Vietnamese teas available on What-Cha.

My Review:
So today I am reviewing the last of the What-Cha samples I received from Alistair. My first review came as What-Cha was the new kid on the block. A year later they appear to have established themselves as a force to be reckoned with in the tea world. I love that they offer teas from around the world, places that I didn't even realize grew tea. I have loved almost everything I have tried from them. I also found that when I asked a question, if Alistair didn't know the answer already, he was willing to dig in to it to find out the answer. So, thank you What-Cha. Much continued success!

The sample is packaged in a resealable aluminum pouch. The suggested brewing parameters are clearly labeled on the front of the bag.

Opening the bag, I am met with a rapid fire hit of three aromas. The first passed before I could identify, though it was familiar. The second was a touch of a roasted scent. The final, well, it reminded me of a certain smell that often came from a room down the hallway in my college dormitory. Not sure what it was but the guys all coughed and laughed a lot ;)

The leaf is rolled into nuggets typical of oolong, except for the unusual color. I lightened the photo so you could see it better. It is very dark, almost black, with cinnamon streaks. It looks like some one rolled a Dian Hong. Just looking at it, this is a hit with me. (rolled, hit, college - I so amuse me)

I  followed directions by steeping for 2 1/2 minutes at 203 F. The nuggets quickly began to expand. The leaf didn't so much dance in the water as it relaxed and stretched. At the end of the steep. looking into the glass pot was a bit like looking into a dark cinnamon colored jungle.

The result is a nifty fall colored liquor. It is bright, clear, and glowing. It reminds me of the colors outside my window today.

The steeped leaf has an aroma that again is familiar but I can't quite recognize. It kind of reminds me of grape jelly, honey, and brownies - kind of. Anyway, it smells good.

I poured the leaf out on a plate for a better look. The color is very neat with brown, cinnamon, and olive greens. The thing that caught my attention was the pile of leaf, through the camera, looked like a dragon on the plate. No college joke here. It is called pareidolia. It is when the brain tries to form a recognizable pattern, like faces in a cloud. So, bonus points for random dragons.

Once I take a sip, I am confused for a moment. This isn't like a typical oolong. It isn't black tea. It doesn't remind me of a green.

There is absolutely no bitterness. I am not noticing much if any astringency (drying).

You can tell words aren't coming to me. The taste is much lighter than I expected. I have gone through my reviews of oriental beauty and Bao Zhong teas, thinking maybe this was similar to those teas. Nope.

There is a woodsy taste. It also reminds me of stone notes, like stream water that has rushed through stones. It doesn't have a strong roasted note but more hints. It is honey and malt, yet only lightly.

I really hate that for my last What-Cha supplied review, I can't come up with a better description. On the other hand, it makes for a good mystery. Maybe you will be inspired to find out for yourself, the secret of the red buffalo.

Posted by The Everyday Tea Drinker at 1:25 PM